A Pill for Men: Dreams, Realities, and Prognosis

During the past four decades, scientific and journalistic reports have periodically predicted a contraceptive Pill for Men within the next five years. Yet no such Pill is on the horizon. The reasons are not due to scientific but rather to operational, economic, and even legal hurdles that are consistently ignored.

Some four decades ago, in an article entitled Prognosis for the Development of New Chemical Birth-Control Agents,1 I reached the conclusion that parochial attitudes in technologically advanced nations make prospects increasingly dismal. In a follow-up article,2 Birth Control after 1984, dealing with realistic operational aspects, I stated: All the advances in fertility control [considered by the WHO] are based in one way or another on chemical approaches…. This type of research… is exceedingly complicated, in both its preclinical and clinical phases; the required manpower and financial resources are available only in the technologically most advanced countries…. The new birth control agents of the future, even though they may be used predominantly in the developed countries, will almost certainly be generated only in countries of or . They will, therefore, be subject to the government regulatory bodies of those countries.... As a person who led a bigamous professional life as an academic as well as a research director of the company (Syntex) that had accomplished the first synthesis of an oral contraceptive (norethindrone) in 1951, I felt qualified to publish2 for the first time a critical path map (Fig. 1) outlining the time and financial resources required at that time to develop a male antifertility agent. 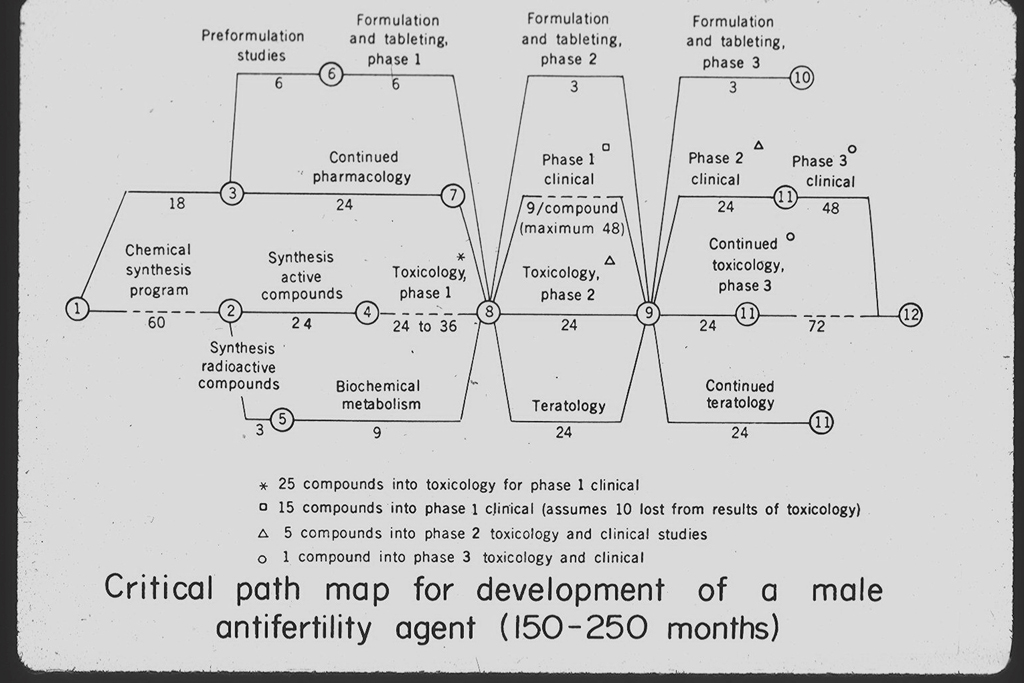 I concluded that given the proper financial investments and operational incentives, it would take on the order of 14 years before regulatory approval (step 12 in Fig. 1) could be reached—hence the use of 1984 in a chronological rather than solely Orwellian sense in the title. In spite of considerable research on a “Pill for Men,” less than a decade later in a chapter, Future Prospects in Male Contraception,3 I made the brutal prediction that every postpubescent American female reading this chapter in 1979 will be past the menopause before she can depend on her sexual partner to use his Pill.

Given the fact that no single method of birth control could ever be acceptable globally, hence requiring a contraceptive supermarket with many different alternatives for both females and males, I published4 a decade later a detailed argument for a wishing list of six significant potential additions to such a sparsely stocked supermarket: (1) new spermicide with antiviral properties; (2) once-a-month female Pill for menses induction; (3) reliable ovulation predictor;5 (4) easily reversible and reliable male sterilization; (5) male Pill; (6) antifertility vaccine. With the exception of (3), none of these is as yet available. Why?

While in some instances, scientific factors can be invoked, this is clearly not the case with a male Pill,6  where the total lack of interest by the twenty largest pharmaceutical companies in the world is a key factor.7 The reasons for this apparently hardnosed dismissal will be discussed in my talk, but at the same time, it may be worthwhile to resurrect a proposal8 which requires no input by the pharmaceutical industry nor regulatory agencies, since toxicological considerations do not enter into the equation. What is needed is to find a politically powerful person—or even just a general—who could persuade the appropriate military service officials to read the issue of Nature.8