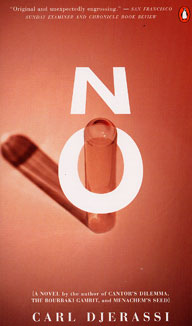 NO
At first glance, most readers would pronounceand interpret the title of this novel as a negative expletive.But all-capitalized-each letter pronounced separately-NO is alsothe chemical formula of the simple, diatomic molecule, nitricoxide, which in 1992 the multidisciplinary journal Sciencenamed "Molecule of the Year" under the cover title "Justsay NO." As will become clear, both meanings are relevantto this fourth volume in my science-in-fiction tetralogy.
In contrast to science fiction, the much rarergenre of science-in-fiction is based in real, or at least plausible,science. Except for some minor predating in chronology (to fitmy plot), no significant aspects of the newly discovered biologicalproperties of NO are made up. Nor, for that matter,is the conduct of the various scientific protagonists, entrepreneurs,and lawyers. They may not exist, but their manners and practicesare right on the mark.
As a chemist, I could not resist the temptation to consider, in these days of rampant chemophobia the recent extraordinary discovery that nitric oxide (NO)-an industrial gas and environmental pollutant (the discovery of which was honored by the 1995 Nobel Prize in Chemistry)-does in fact fulfill a singularly complicated and sophisticated function in the human body, where (continuously generated) it serves as a biological messenger, indispensable in a staggering variety of processes, including penile erection. This, in turn, led me to use the therapeutic treatment of male functional impotence as the vehicle for illustrating the role of a biotech company in contemporary biomedical research.
Current investigations on erectile dysfunctioncenter around a device, called MUSE (an acronym for MedicatedUrethral System for Erection), the invention of VIVUS, Inc., aCalifornia company of the 1990s. The originator of MUSE andfounder/chairmanof VIVUS, Dr. Virgil Place, has generously provided me with unpublishedtechnical information on the treatment of male impotence whichI have woven into my plot. But caveat lector: my descriptionof the fictional MUSA system (Medicated Unit for Sexual Arousaland also the name of the genus to which the banana plant belongs)and especially its incorporation of NONOates (the class of nitricoxide releasers recently reported by the National Cancer Institute)should by no means be read as constituting an endorsement of anytreatment for erectile dysfunction.
Since my own scientific contributions inreproductivebiology have focused on women rather than men, I could not resistintroducing a second biotech development involving ovulation prediction-acurrent focus of my teaching at Stanford University. The electrochemicalapproach and the fictitiously named Wizard of Ov described inthis novel are based in part on very recent developments of ConceptionTechnology, Inc., in Fort Collins, Colorado. But the same caveatapplies here as well: I take no responsibility for any child'spaternity or any failure in sex-predetermination based on theuse of this novel's Wizard.

The research scientist's culture and moresare tribal. Like most such behavior, scientific tribalism is acquiredby example, by apprenticeship via a mentor-disciple relationship,and by intellectual osmosis rather than through textbooks or lectures.Members of the scientific tribe rarely describe their culturalpractices, not because they have signed a covenant of secrecynor because one's own cultural routine is rarely articulated butbecause research scientists generally are uninterested in dialogwith the lay public. In science, professional advancement andrecognition depend solely on approbation by one's peers, not oncommunication with or approval by nonscientific outsiders.
As a long-term insider of this tribe, I amattempting to narrow the ever-widening gulf between the scientificcommunity and the other subcultures of contemporary society-thearts and humanities, the social sciences and, most strikingly,the culture at large-through the medium of science-in-fiction.Until now, my novels focused mostly on the academic world, butin NO, I have moved to another subculture with which contemporaryscience exists in a sometimes uneasy relationship: industry-morespecifically, the small, entrepreneurial, research-driven enterprisessometimes collectively referred to as biotech.
As a founder, former officer and director,and occasional gadfly of several such companies-as well as a universityprofessor-I am intimately familiar with this setting. Furthermore,in contrast to "big" industry, biotech companies ofthe eighties and nineties are a uniquely American phenomenon bornout of academia (much of it right in my own backyard-the San FranciscoBay Area). Because of their intellectual origins in educationalinstitutions, biotech ventures have generated a series of contentiousproblems, arising from the interaction of profit-driven enterpriseswith supposedly non-profit institutions and (ideally) disinterestedindividual scientists. These have caused numerous legal, philosophical,and ethical debates that will continue to influence the conductof science within the academy, as well as the ways it is disseminatedinto the economy and culture at large. NO describes someof these behind the thin veil of fiction.
One other issue that I have chosen to highlighthere is the scientist's overwhelmingly patriarchal clan culturein which my fictional, and at times not so fictional, charactersmove. In my fiction, I invariably return to two gender issues:the historic marginalization of women in the male-dominated scientificuniverse and the attempts of modern women, as well as some men,to change this state of affairs. No wonder most of my female charactersare "independent"--a pejorative term to some but theultimate compliment in my own eyes.

"I didn't know you were interested inEnglish antiques, Max."
"My new wife is, so I'm starting tolearn."
"Ah yes, your wife. I understand shehas one of those MacArthur 'genius' awards. What's it like tolive with a genius?"
"So far, great. About the only disadvantageI see is that I'll never get a MacArthur. I don't think they'dgive another one to a spouse."
"I know how you must feel, Max,"Cantor eyed him craftily. "They don't seem to give them toNobel recipients either. They must think we're now completelysatisfied."
"And are you?" asked Celestine Price,who had listened to their exchange with increasing annoyance.
"You should know," Cantor said somewhatbrittlely. "You're living with one." He turned awayto address the rest. "The deli promised delivery by twelve.There will be wine, of course... quite passable vintages, if Imay say so, from California, naturally, in honor of our corporatesponsor and of Renu, who's flown all the way to Chicago to simplifylife for us busy academics." He inclined his head in Renu'sdirection, ignoring Celestine Price, who had come in from LosAngeles. "Although we should abstain from alcohol until wehave completed at least some of our business. In the meantime,there are plenty of non-alcoholic drinks over there," hemotioned in the general direction of the kitchen, "soft drinks,juices, mineral water....". His eyes cruised around the tablepast his four colleagues, to rest, with undisguised disapproval,on the plastic mineral water bottle by Celestine Price's side.At least, he observed, she'd had the courtesy to place it on hernotepad, but the fact didn't mollify him sufficiently, especiallysince she found it necessary to take a sip or two every few minutes.Cantor was old-fashioned enough to object to the current vogueamong younger women, notably the "organic" members ofthat class, who ostentatiously carry their water bottles withthem whether they are jogging or going to the opera-like wearingNikes with a formal dress. In his home, it offended his senseof esthetics and propriety, implying as it did the unavailabilityof anything but "ordinary" H2O from his kitchenfaucet. He'd never forgotten his falling out of sync during aquartet performance when he'd noticed a young female listenertaking a swig while he fiddled rapturously. But Celestine Priceof all people!
His irritation was fueled by the realizationthat he had only himself to blame. Chairing the SAB was hardlyonerous-this was only the third meeting they'd held in two years,and he'd even persuaded Renu Krishnan to schedule this one inChicago. "Marletta is practically next door, in Ann Arbor,"he'd said at the conclusion of their last meeting in Palo Alto."And Weiss can fly here in a couple of hours from Newark.Let's meet in my apartment in Chicago. It's properly off-campus-afterall we shouldn't conduct non-university business on hallowed academicturf," he'd added with a conspiratorial wink that seemedout of character," and we can all be back in our homes thesame evening. That is, everyone but you, Renu. But think of themoney SURYA saves by our not flying to the West Coast."

"John Maddox, the editor ofNature,once wrote that science is intrinsically bad-mannered."
"Come now, Celly. That's overstatingit."
"No, it isn't. Each of us wants to bethere first. We push pretty hard to get there and if someone shouldbeat us we break our backs trying to prove him wrong. In my case,especially if it's a him. Of course in science, havingothers trying to prove us wrong is what keeps us honest. But inthe process, we do lust-blood-lust, I think it's called."
"Oh come now, Celly. Are you suggestingthat people do science because it's some kind of competition?A contact sport for nerds?"
"It's an unpleasant proposition todefend,"sighed Celestine, "but how about this? The evolutionary argumenthas been made that humans have a mixed allegiance to two contradictorycodes of conduct: friendly cooperation within their community,but competition and warfare outside it. We approve of amity, butenmity between states is a necessary condition for human evolution.Maybe that's what made William James ask whether one could finda moral equivalent for war. It seems to me that you'll only haveto read 'competition' for 'war' to find yourself in the scientificworld, which at the same time pays homage to cooperation. WhatI'm saying is sad in a way but probably true."
Renu broke the silence. "Are you competingwith your husband?"
* * * * *
Celestine reached across the table to pat herhand. "Enough of husbands. Let's talk about us women. I'venever asked before, but why didn't you consider an academiccareer?"
"But I did." Renu's reply wasinstantaneous."In contrast to what you told me about your own training,about getting your Ph.D. with a woman professor, I had no womenrole models. My supervisor in grad school at Stanford was a man.Even my undergraduate research was done with a man, Michael Marletta.And then came my postdoc with Prof Frankenthaler. They all werevery supportive and assumed all along that I'd stay in the academicpipeline, but," Renu's tone turned critical, "no onetalked about the extreme leakiness of that pipe, especially forwomen. I know there are exceptions. You're a remarkable one: atenure-track job in one of the top universities without even aprior postdoc. Now don't take this as a criticism." She leanedforward. "But, in the process, you seem to have acceptedall of the male values. Right now, how much leeway do you giveyour graduate students? Aren't they expected to work on what youtell them to work on? And won't you be tempted to keep the beststudents just a bit longer, precisely because they are so productiveand because that productivity will help you get tenure?And when you do pass that hurdle and get lots of grants, willyou be tempted to have an army of two or three dozen pairs ofhands like some of the big shots in organic chemistry?" Renurealized her voice was getting loud. She straightened, and triedto calm down. "Even if none of that should apply to you,just think what you said a moment ago about competition."
"And you're so different?" Celestinesaid coolly. "In your position as president of a high-techcompany? In testosterone-soaked Silicon Valley?" 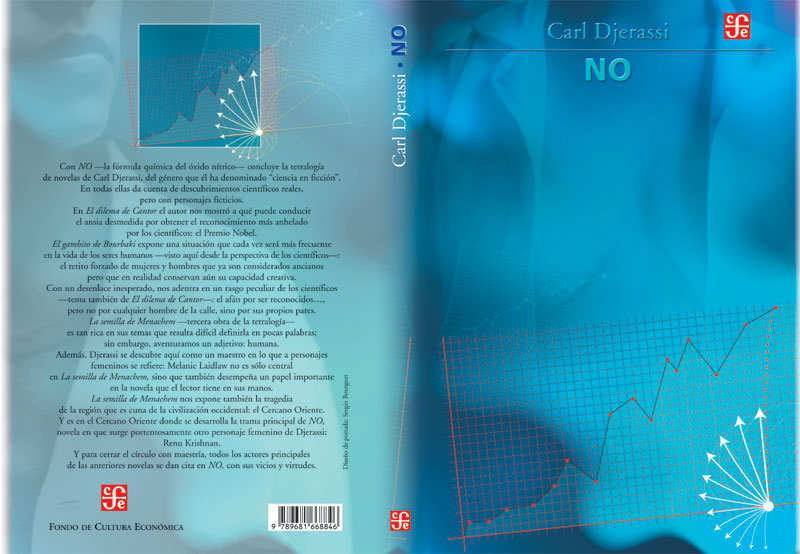 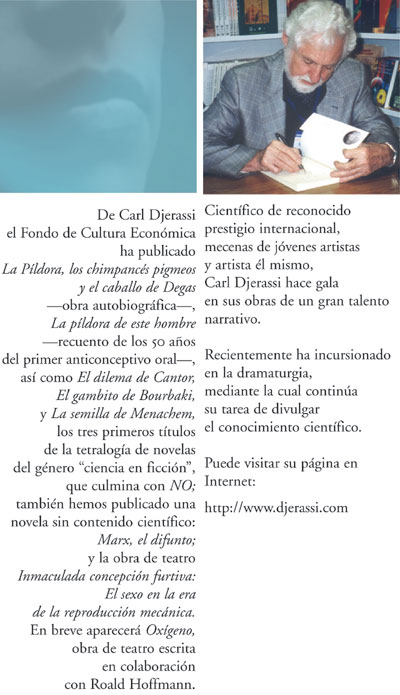